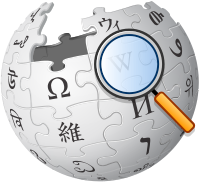 Logo for the Wikipedia CheckUser tool and the checkuser team

Wikipedia's checkuser team uses the tool to establish whether two or more accounts are being operated by one individual or group of people, and then to protect Wikipedia against disruptive or abusive behaviour.

CheckUser data is never accessed or released except in accordance with the Wikimedia Foundation's (WMF) privacy policy and the additional restrictions placed by this policy. After completing an investigation with the CheckUser tool, most checkusers release their findings in generalised form (such as with a statement that "account A is, is not, or may be the same as accounts B or C"); on the English Wikipedia, the release of actual private data (like "account D is connecting through IP address 0.1.2.3") is exceptionally rare. Conclusions derived from CheckUser data have limited usefulness, and a negative finding by a checkuser rarely precludes obvious sockpuppetry.

The CheckUser tool may be used only to prevent disruptive editing on the English Wikipedia or to investigate legitimate, credible concerns of bad-faith editing or sockpuppetry.

CheckUser data may be used to investigate, prevent, or respond to:

The tool may never be used to:

The primary purpose of CheckUser is the prevention of sockpuppetry, but community policy provides for several legitimate uses of alternative accounts where the alternative accounts are not being used to violate site policy (such as by double voting or by giving the impression there is more support for a position in a discussion or content dispute).

On some Wikimedia projects, an editor's IP addresses may be checked upon their request, typically to prove innocence against a sockpuppet allegation. Such checks are not allowed on the English Wikipedia and such requests will not be granted.

Checkusers are permitted, but not required, to inform an editor that their account has been checked. The result of a check may be disclosed to the community (on a community process page like Wikipedia:Sockpuppet investigations).

The CheckUser feature facilitates access to non-public information. The Wikimedia Foundation takes the privacy of its users extremely seriously, and there may at times be tension between protecting Wikipedia from damage and disruption, and protecting the privacy of users (even disruptive ones). Checkusers must perpetually weigh these opposing concerns. In order to reach the optimal result, checkusers on the English Wikipedia are required to adhere to the following conventions and practices:

These conventions arise out of practice that has emerged in the years since the checkuser tool was created, and in some cases out of rulings or "statements of best practice" by the Audit Subcommittee (now disbanded) and the Arbitration Committee.

Checkusers may state that different named accounts are operated from the same IP or range, so long as the actual IP address(es) are not specified, or if only non-specific details are given (such as the name of the country, region, or large ISP associated with the IP address). If the checkuser's statement could not lead to another person divining the personal identity of the user accounts in question, such disclosure would be permissible. However, on the English Wikipedia, checkusers are discouraged from making a public statement that connects one or more IP addresses to one or more named accounts, since an IP address is often much more tightly linked to a specific person. (In the case of larger IP ranges, this discouragement is not as great because larger ranges mean a less specific connection can be drawn.) When announcing the results of their checks, checkusers will employ a variety of means to avoid connecting a user to an IP address, but in some cases it is hard to avoid doing so. This policy encourages English Wikipedia checkusers not to allow such connections to be made from their results, but the global privacy policy allows them to do so in the case of serious disruption, and this policy allows checkusers to prioritise compliance with Wikipedia policy over the personal privacy of a user who has abusively edited the encyclopedia.

In some situations, while checkusers can endeavour to avoid explicitly connecting an account to an IP address, they will find it difficult or impossible not to do so. For instance, when a user edits disruptively using multiple IPs, or a mixture of IPs and accounts, the checkuser will find it difficult to block the accounts and then the IP addresses without an obvious inference being drawn by onlookers from the series of blocks being made in a short period of time. When a user abusively uses several accounts and it is reasonably plausible they will create more accounts, the underlying IP range must be blocked so further abusive accounts cannot be made. The IP addresses and user accounts must therefore be blocked together.

Users who engage in problematic conduct to the point that requests for administrative action or blocking are raised and considered valid for CheckUser usage—and where a checkuser then determines the user probably has engaged in such conduct—must expect the protection of the project to be given a higher priority than the protection of those who knowingly breach its policies.

Information about users (like their IP address) is retained for a limited period on Wikimedia Foundation sites. Data retention is limited in this way because incidents or actions that are not current rarely require investigation.

Guidance given to checkusers

m:CheckUser policy advises that even if the user is committing abuse, personal information should if possible not be revealed. Checkusers are advised as follows:

On the English Wikipedia, checkusers asked to run a check must have clear evidence that a check is appropriate and necessary. The onus is on an individual checkuser to explain, if challenged, why a check was run. The CheckUser log is regularly examined by arbitrators. All actions associated with the CheckUser tool, especially public or off-wiki actions, are subject to public view and can result in a complaint being filed against you with the Arbitration Committee, the Wikimedia Foundation Ombuds Commission, or both. Checkusers who run checks based on an unsubstantiated accusation may be cautioned or subject to sanctions, up to and including the revocation of their permissions; for a previous example of this, see this 2009 investigation by the Audit Subcommittee.

"Fishing" is to check an account where there is no credible evidence to suspect sockpuppetry. Checks are inappropriate unless there is evidence suggesting abusive sockpuppetry. For example, it is not fishing to check an account where the alleged sockmaster is unknown, but there is reasonable suspicion of sockpuppetry, and a suspected sockpuppet's operator is sometimes unknown until a CheckUser investigation is concluded. Checks with a negative result do not mean the check was initially invalid.

Checkusers are seasoned, experienced users, trusted to handle sensitive and privacy-related matters and other user issues. Routine sockpuppet and editing issues requiring checkuser review are handled at Wikipedia:Sockpuppet investigations. In keeping with WP:NOTBUREAUCRACY, checkusers are authorised to receive contact by other means, like on their talk pages, by email, on IRC or a mailing list, and so on. If an incident is of a private or sensitive nature, you should never use public means of contact. If an incident is of an urgent nature, you should contact a checkuser you know to be online, or contact multiple active CheckUsers. If an incident is an emergency, you should contact the Wikimedia Foundation. If you require an editor with checkuser access, you may contact: 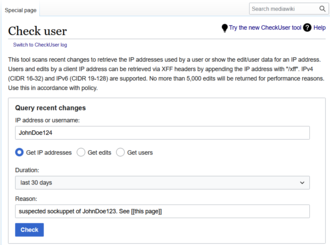 A screenshot of the CheckUser form with the Monobook skin.

Several scripts exist for English Wikipedia checkusers, including User:Amalthea/culoghelper.js, User:Amalthea/cufilter, ru:MediaWiki:Gadget-markblocked.js, User:Tim Song/spihelper.js, among others. (No guarantee is given that these scripts are currently functional.)

Checkusers must be able to provide a valid reason to another checkuser (or the Arbitration Committee) for all checks they conduct.

Checkusers should clearly mark as a "checkuser block" any block based on findings that involve checkuser data. The templates {{checkuserblock}} and {{checkuserblock-account}} may be used for this purpose. However, in the case of such blocks, checkusers are not required to explain to non-checkusers the specific evidence at play (and are prohibited from doing so by the privacy policy).

Checkusers can block accounts based on technical (checkuser) evidence. They will make clear in the block log summary that they have blocked as a "checkuser action", usually by including the {{checkuserblock}}, {{checkuserblock-account}}, or similar templates. These blocks must not be reversed by non-checkusers. Administrators must not undo nor loosen any block that is specifically called a "checkuser block" without first consulting a checkuser or the Arbitration Committee.[notes 1][notes 2] However, all checkuser blocks are subject to direct review and significant scrutiny by the other checkusers and the Arbitration Committee. If you are concerned that a checkuser block has been made in error, you should refer the block promptly to the functionaries team, who will carefully review the CheckUser evidence. Checkuser blocks may subsequently be appealed, as a matter of last resort, to the Arbitration Committee. 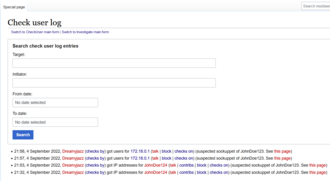 CheckUser queries cannot be executed on the English Wikipedia without the initiator entering something into the "Reason for check" field, which is akin to the edit summary feature for page-editing. All queries are logged at Special:CheckUserLog, which is visible to other checkusers through Special:CheckUser. Each entry in the log will show who ran the check, when, the check reason, and what type of data was called (the tool can be used to get IPs, edits from an IP, or users for an IP). The log does not display, nor allow for the retention of, data returned from a check.

Checkuser permissions can be revoked for not meeting the minimum activity level or for cause. If the Committee feels that an editor has abused CheckUser, such as by inappropriately performing checks or needlessly disclosing privacy related information from a CheckUser inquiry, they will request a Steward to remove the permission from the editor. This may be done by any of the usual ways, including e-mail or a request on requests for permission on Meta. Emergency requests based upon clear evidence may also be made in exceptional circumstances, the same way. In an exceptional case, and for good cause, a steward may temporarily remove the permission, pending a decision by the Committee. The steward should check that the matter is well-founded, and make clear immediately that it is a temporary response only, since such an action could lead to controversy.

Any user account with CheckUser status that is inactive for more than one year will have their CheckUser access removed.

In case of abusive use of the tool, the Steward or the editor with the CheckUser privilege will immediately have their access removed. This will in particular happen if checks are done routinely on editors without a serious motive to do so (links and proofs of bad behavior should be provided).

Suspicion of abuses of CheckUser should be discussed by each local wiki. On wikis with an approved ArbCom, the ArbCom can decide on the removal of access (...)

Complaints involving the release of personally identifying information or other potential violations of the WMF's Privacy Policy should be made to the Ombuds commission.

Other complaints or inquiries about potential misuse of the checkuser tool should be referred to the Arbitration Committee.

Others[3]
Jimbo Wales, some Wikimedia staff members (prohibited from use by internal policy except in rare cases), Wikimedia Ombuds.[4]

This page is referenced in the Wikipedia Glossary.