From Wikipedia, the free encyclopedia
Jump to navigation Jump to search

The Aromanians conform a Balkan ethnic group which is scattered in several countries such as Albania, Bulgaria, Greece, North Macedonia, Romania and Serbia.[1][2] Usually, the neighbors of the Aromanians use the term "Vlach" to refer to them. However, the same term is also used for the Megleno-Romanians, a small related Balkan people.[3] Before the establishment of the Ullah Millet, the Aromanians were under the jurisdiction of the Greek Ecumenical Patriarchate of Constantinople. This was because they practised Eastern Orthodoxy. During this time, most of the priests were Greeks and the Aromanians could not use their own language in church services. This conflict between the Aromanians and Greeks eventually escalated to physical violence, sparking fights between members of both groups. Due to this, the Aromanians started to call for help to the Ottoman authorities and the Romanian Government.[4] 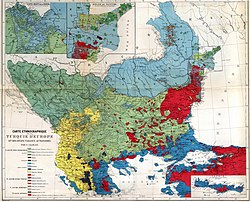 Ethnographic map of the Balkans of 1861 by Guillaume Lejean. The Aromanians are shown in a very dark blue color, surrounded mostly by Albanians (who are represented in yellow; their distribution in this map is inaccurate in the area of Epirus). The Megleno-Romanians are shown as Aromanians.

On 28 June 1904, the Aromanians made a request to the Ottoman authorities. They asked to be separated from the Greeks and to be recognized as a community (a millet) officially and legally in the country. They also asked to have a representative in Istanbul and the right to choose Aromanians in the villages they populated. The Romanian government strongly supported these demands and tried to convince the Ottoman Empire to accomplish them. However, the Sultan of the Ottoman Empire, Abdul Hamid II, decided to ignore these requests to avoid political conflicts. In those times, the Ottoman Empire was specially worried about a possible loss of the region of Macedonia and a change of the status quo in the Balkans. For these reasons, the requests were rejected.[4]

The rejection of their requests by the Ottomans and the Greek opposition of their self-determination sparked the beginning of cooperation between Aromanians and Bulgarians. Bulgarians allowed Aromanian priests to worship in their own language if they joined the Bulgarian Exarchate and some Aromanians started joining Bulgarian local bands. This alarmed the Ottoman authorities, which feared a possible complete alliance between the Bulgarians and the Aromanians. Furthermore, as the Macedonian Struggle intensified in the international scenario, the Aromanian problem took on greater importance. As a result, the German Empire began to support them in their quest for rights. After Abdul Hamid II learned of the demands that Germany was making on behalf of the Aromanians, he turned towards the Sublime Porte to seek a solution to the Aromanian issue.[4]

Thus, on 22 May 1905, Sultan Abdul Hamid II issued an irâde-i seniyye ("spoken will") in which he granted the Aromanians all rights proper of a millet with the exception of a religious head, therefore creating the Ullah Millet.[1][2][5] In this decree, the Aromanians were not granted a separate church, but they were given the right to perform religious services in Aromanian[5][6] and to choose their own mayors in their villages.[5] The following day, the Sultan's decision was publicly announced. The news was happily received in Romania, in which the establishment of the Ullah Millet was seen as a great victory.[7] However, the decision met a strong Greek opposition, leading to the killing of Aromanian clergymen and violence against the attendants of Aromanian schools by Greek bands. This caused a diplomatic crisis between Greece and Romania.[5]

Although they did not obtain their independent church, the Aromanians were satisfied with the new situation. However, they had problems exercising their new rights in some conflictive or multiethnic areas. In the end, after the Balkan Wars, the Ottoman Empire lost the lands where the Aromanians lived. This caused the Aromanians to lose their minority rights and made them an ethnic group scattered in various countries, making the fight for the survival of the Aromanian ethnicity, language and culture more difficult.[4]

The establishment of the Ullah Millet is symbolic for the Aromanians and is commemorated by many of them in the Aromanian National Day every 22[1][2] or 23 May.[7][8] Nevertheless, many of those Aromanians of Greece who are still loyal to the country usually reject the holiday as it is perceived as symbolizing a defeat for their perceived "motherland". This is because the recognition of the Ullah Millet was regarded as a diplomatic defeat for Greece at the time.[7]

The Ullah Millet is also observed in Romania through the Balkan Romanianness Day. This holiday is meant for the Aromanians but also for the Megleno-Romanians and the Istro-Romanians, perceived in Romania simply as ethnic Romanian subgroups living south of the Danube.[9] Unlike the Aromanian National Day, the Balkan Romanianness Day is celebrated every 10 May[10] as Romania only adopted the Gregorian calendar in 1919.[11] Additionally, attempts to officialize the Aromanian National Day in Romania have been rejected.[12]