From Wikipedia, the free encyclopedia
Jump to navigation Jump to search
Fountain in Rome, Italy

The Trevi Fountain (Italian: Fontana di Trevi) is an 18th-century fountain in the Trevi district in Rome, Italy, designed by Italian architect Nicola Salvi and completed by Giuseppe Pannini and several others. Standing 26.3 metres (86 ft) high and 49.15 metres (161.3 ft) wide,[1] it is the largest Baroque fountain in the city and one of the most famous fountains in the world.

The fountain, at the junction of three roads (tre vie),[3] marks the terminal point[4] of the "modern" Acqua Vergine—the revived Aqua Virgo, one of the aqueducts that supplied water to ancient Rome. In 19 BC, supposedly with the help of a virgin, Roman technicians located a source of pure water some 13 km (8.1 mi) from the city. (This scene is presented on the present fountain's façade.) However, the eventual indirect route of the aqueduct made its length some 22 km (14 mi). This Aqua Virgo led the water into the Baths of Agrippa. It served Rome for more than 400 years.[5]

The name of the Latin fountain derives from the Latin word Trivium (intersection of three streets). The statue is located right in the center of De 'Crocicchi Street, Poli Street and Delle Muratte Street.[6]

During the sixth century, the aqueducts were not well maintained and the 14 functioning ones were damaged following the invasion of the Ostrogoths.[citation needed]

The virgin water aqueduct carries the water to the Trevi fountain, after having collected it 10 km from the Italian capital.[citation needed]

The aqueduct is still in use today, despite some interventions during which the fountain remained empty. Calcium-free water is thought to be one of the causes.[7] 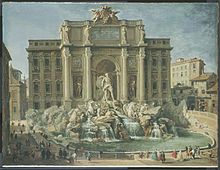 In 1629, Pope Urban VIII, finding the earlier fountain insufficiently dramatic, asked Gian Lorenzo Bernini to sketch possible renovations, but the project was abandoned when the pope died. Though Bernini's project was never constructed, there are many Bernini touches in the fountain as it exists today. An early influential model by Pietro da Cortona, preserved in the Albertina, Vienna, also exists, as do various early 18th century sketches, most unsigned, as well as a project attributed to Nicola Michetti[8] one attributed to Ferdinando Fuga[9] and a French design by Edmé Bouchardon.[5]

Competitions had become popular during the Baroque era to design buildings, fountains, as well as the Spanish Steps. In 1730, Pope Clement XII organized a contest in which Nicola Salvi initially lost to Alessandro Galilei – but due to the outcry in Rome over a Florentine having won, Salvi was awarded the commission anyway.[10] Work began in 1732.

Salvi died in 1751 with his work half finished, but he had made sure a barber's unsightly sign would not spoil the ensemble, hiding it behind a sculpted vase,[11] called by Romans the asso di coppe, the "Ace of Cups", because of its resemblance to a Tarot card.[12] Four different sculptors were hired to complete the fountain's decorations: Pietro Bracci (whose statue of Oceanus sits in the central niche), Filippo della Valle, Giovanni Grossi, and Andrea Bergondi.[13] Giuseppe Pannini (1718-1805), son of Giovanni Paolo Panini, was hired as architect.[14]

The Trevi Fountain was finished in 1762 by Pannini, who substituted the present allegories for planned sculptures of Agrippa and Trivia, the Roman virgin.[15] It was officially opened and inaugurated on 22 May by Pope Clement XIII.[16]

The majority of the piece is made from Travertine stone, quarried near Tivoli, about 35 kilometres (22 miles) east of Rome.[17]

The fountain was refurbished once in 1988 to remove discoloration caused by smog,[18] and again in 1998; the stonework was scrubbed and all cracks and other areas of deterioration were repaired by skilled artisans, and the fountain was equipped with recirculating pumps.[19]

In January 2013, it was announced that the Italian fashion company Fendi would sponsor a 20-month, 2.2-million-euro restoration of the fountain; it was to be the most thorough restoration in the fountain's history.[20] 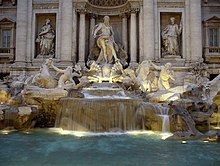 The backdrop for the fountain is the Palazzo Poli, given a new façade with a giant order of Corinthian pilasters that link the two main storeys.[24] Taming of the waters is the theme of the gigantic scheme that tumbles forward, mixing water and rockwork, and filling the small square. Tritons guide Oceanus's shell chariot, taming hippocamps.[20]

In the centre, a robustly-modelled triumphal arch is superimposed on the palazzo façade. The centre niche or exedra framing Oceanus has free-standing columns for maximal light and shade. In the niches flanking Oceanus, Abundance spills water from her urn and Salubrity holds a cup from which a snake drinks. Above, bas reliefs illustrate the Roman origin of the aqueducts.[25]

The Tritons and horses provide symmetrical balance, with the maximum contrast in their mood and poses[citation needed] (by 1730, Rococo was already in full bloom in France and Germany).

Coins are purportedly meant to be thrown using the right hand over the left shoulder.[26] This was the theme of 1954's Three Coins in the Fountain and the Academy Award-winning song by that name which introduced the picture.

In 1973, the Italian national postal service dedicated a postage stamp to the Trevi Fountain.[19]

In the 2003 film The Lizzie McGuire Movie, Lizzie tossed a coin into the Trevi Fountain to wish for smooth sailing in her coming high school years.