Jephthah (pronounced /ˈdʒɛfθə/; Hebrew: יִפְתָּח, Yīftāḥ), appears in the Book of Judges as a judge who presided over Israel for a period of six years (Judges 12:7). According to Judges, he lived in Gilead. His father's name is also given as Gilead, and, as his mother is described as a prostitute, this may indicate that his father might have been any of the men of that area.[1] Jephthah led the Israelites in battle against Ammon and, in exchange for defeating the Ammonites, made a vow to sacrifice whatever would come out of the door of his house first. When his daughter was the first to come out of the house, he immediately regretted the vow, which bound him to sacrifice his daughter to God. Jephthah carried out his vow.

Traditionally, Jephthah ranks among the major judges because of the length of the biblical narrative referring to him, but his story also shares features with those of the minor judges, such as his short tenure—only six years—in office.[2]

Jephthah, having been born illegitimately, is driven out by his half-brothers and takes up his dwelling in Tob, east of Gilead. "Outlaws collected around Jephthah and went raiding with him."[4] The elders of Gilead ask him to be their leader in the campaign against the Ammonites, but he holds out for a more permanent and a broader position, and the elders agree that, provided Jephthah succeeds in defeating Ammon, he will be their permanent chieftain. On behalf of Israel as a whole and in reliance on the might of God the Judge, Jephthah challenges the Ammonites. Jephthah swears an oath:

". . . and whatever [footnote: Or whoever] comes out from the doors of my house to meet me when I return in peace from the Ammonites shall be the LORD's, and I will offer it [footnote: Or him] up for a burnt offering.

The victorious Jephthah is met on his return by his only child, a daughter. Jephthah tears his clothes and cries, "Alas, my daughter! You have brought me very low!" but is bound by his vow: "I have opened my mouth to the Lord, and I cannot take back my vow".[5] The girl asks for two months' grace, "...that I may go up and down on the mountains and weep for my virginity".[6] And so Jephthah "did with her according to his vow that he had made".[7] The story ends by recounting how "the daughters of Israel went year by year to lament the daughter of Jephthah, the Gileadite, four days in the year".[8]

Later, Jephthah was forced to fight against the Ephraimites, who refused to aid him in his struggle against the Ammonites. The story is remembered for the killing of the fugitive Ephraimites who were identified by their accent; they said the Hebrew word shibboleth as sibboleth. "At that time 42,000 of the Ephraimites fell" (Judges 12:5–6).

Jephthah is referenced once in the Epistle to the Hebrews 11:32 where he is commended for his faith.

The Return of Jephtha, by Giovanni Antonio Pellegrini

Jephthah's sacrifice of his daughter stands in stark contrast to the Binding of Isaac in the Book of Genesis, in which Abraham was about to perform a divinely ordered sacrifice of his son, when an angel of God directly intervened and stopped the sacrifice.

Some writers have observed that the Israelites of the time were decidedly barbarous; that Mosaic law (which forbade human sacrifice) was at this time widely disrespected; and that there are several other examples of rash vows to God with similarly terrible consequences.[9] David Janzen argued that the story was an integral part of the Deuteronomist picture of moral decline through adoption of non-Israelitic practices such as child sacrifice.[10] Solomon Landers believed that the absence of express judgement implies that the sacrifice was not acceptable to God, notwithstanding the fact that the sacrifice nevertheless happened.[11] The Book of Judges has been seen as teaching a cycle of pride associated with rejection of God's law and subsequent suffering of the people.[by whom?]

Pseudo-Philo's Liber Antiquitatum Biblicarum gives a name for Jephthah's daughter, Seila. Her character is elaborated and emphasized;[12][13] "the author has done his utmost to put this woman on the same level as the patriarchs, in this case especially Isaac."[14] John Chrysostom held that God allowed Jephthah to kill his daughter in order to prevent similar rash vows being made in the future and that it was for that purpose that the annual bewailing of the event took place as a constant reminder.[15] Ambrose cited the story as an example of how it is "sometimes contrary to duty to fulfill a promise, or to keep an oath".[16]

The Talmud characterizes Yiftach (Jephthah) as a person of poor judgment, who makes "unfitting" vows without proper consideration for consequences (B'reishit Rabbah, 60:3). The midrash (Tanhuma Bechukotai 7) asserts that if Jephthah had read the laws of vows in the Torah, he would not have lost his daughter.[17] The rabbis also ascribe Jephthah's death to his actions, as punishment: "Jephthah’s penalty consists of the shedding of his limbs, which are buried in numerous places, as is learned from Jud. 12:7: 'Then Jephthah the Gileadite died and he was buried in the towns of Gilead.' One limb would slough away and be buried in one location, and then another would fall off somewhere else and be buried there."[17]Rashi also quotes the Midrash Rabba saying that he was punished for not going to the high priest to get the vow annulled and was afflicted with an illness that caused his limbs to decompose off of his body at which point it would be buried where it fell thereby explaining the verse that said he was buried in the cities as opposed to city of Gilead.[18] According to some rabbinical commentators, Phineas also sinned by failing to address the needs of relieving Jephthah of his vow to sacrifice his daughter.[19] As consequence, the high priesthood was taken from him and temporarily given to the offspring of Ithamar, essentially Eli and his sons.

Since at least the 12th or 13th century, Jewish scholars, among them the compiler and summarizer David Kimhi (1160–1235) and Levi Ben Gershon (1288–1344), have taken fulfilment of Jephthah's vow as meaning that he only kept her in seclusion.[20] This view is put forward also by Christian scholars from the 14th century[21] and continues to be propounded today, as by Solomon Landers, who considers it most likely that the fate of Jephthah's daughter was perpetual virginity or solitary confinement.[22][23]

In any case, it should have been unlawful, and repugnant to Jehovah, to offer a human being to Him as a burnt-offering, for His acceptance. Such offerings were common to heathen nations at that time, but it is noteworthy that Israel stands out among them with this great peculiarity, that human sacrifices were unknown in Israel.

However, in the Hebrew Bible, the same word for 'burnt offering' (Hebrew, ʿōlāh) used in reference to Jepthah and his daughter in Judges 11:31 is also used in other Biblical stories alluding to human sacrifice, such as the story of Abraham and Isaac (Genesis 22) and Mesha of Moab and his son (2 Kings 3:27). Moreover, an ʿōlāh in the Hebrew Bible exemplifies a pure gift to the deity.[26] Thus, Jephthah is not stating an alternative between dedicating something to God and offering it up as a burnt offering, but clearly linking the two.

Adam Clarke's Commentary has an exposition of the issues at stake in this passage and contends that the vow Jephthah made was not as rash as it sounds.[27]

The Order of the Eastern Star refers to her as Adah.[28] 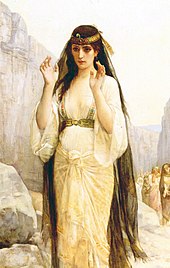 The Daughter of Jephthah, by Alexandre Cabanel (1879).

Israel Finkelstein has suggested that behind multiple and large-scale Deuteronomistic and post-Deuteronomistic additions and redactions, there may lie an oral story which reflects a conflict on the boundary between Israelite and Ammonite settlements in Transjordan, around the towns of Gilead and Mizpah. It may have been first written down in the 8th century BCE, when the Northern kingdom of Israel (Samaria) began to collect its heroic tales, royal stories, and foundation myths.[29] Finkelstein has also suggested that the story of Jephthah's vow may have been added into the story as late as the Hellenistic period.[30]

The 18th-century French philosopher Voltaire (citing the 2nd Century BC writer Apollodorus) noted the similarities between Jepththa and the mythical Cretan general, Idomeneus, speculating whether one story had in fact imitated the other. Idomeneus had asked the gods to calm a storm, promising in return that he would sacrifice the first living thing he saw upon his return, which turned out to be his son.[31]

The story of Jephthah's daughter is also sometimes compared to that of Agamemnon's daughter Iphigenia. In his play Jephthas sive votum – Jeptha or the Vow, the Scottish scholar and dramatist George Buchanan (1506–1582) called Jephthah's daughter "Iphis", obviously alluding to Iphigenia,[32][33] and Handel's 1751 oratorio, Jephtha, based on Buchanan's play, uses the same name.

The story of Jephthah has influenced a number of literary works.[34]