From Wikipedia, the free encyclopedia
Jump to navigation Jump to search
Highest reward of Ukraine

Hero of Ukraine (HOU; Ukrainian: Герой України, Heroy Ukrayiny) is the highest national title that can be conferred upon an individual citizen by the President of Ukraine. The title was created in 1998 by President Leonid Kuchma and as of 18 June 2022 the total number of awards is 646. The title is granted to two different order recipients: the civilian Order of the State, and the military Order of the Gold Star. The first foreigner awarded the award was Belarusian Mikhail Zhyzneuski in June 2017.[1]

The origin of the "Hero of Ukraine" award can be traced to the Hero of the Soviet Union (established 16 April 1934) and the Hero of Socialist Labor (27 December 1938), the highest decorations established in the Soviet Union, of which Ukraine was a constituent republic. Most of the recipients of the former title received it for heroic military action (with Soviet cosmonauts being a notable exception), while those awarded the latter were recognized for their contributions to national economy and culture.[2] The awards could be given to the same individual more than once, and only the Presidium of the Supreme Soviet could deprive a recipient of the award once given.[3] After the dissolution of the Soviet Union in 1991, similar awards were created in the resulting independent countries,[4][5] including Ukraine.

Two medals were created by Ukrainian law to differentiate between the titles. They have several common features; both medals use a ribbon 45 mm (1.8 in) long and 28 mm (1.1 in) wide and are divided equally into two bands along its length, with a blue band on the left and a yellow band on the right, matching the colors of the Ukrainian flag. Connected to the ribbon is a suspension device joined to a medallion, both of which are made out of gold. On both medals, the name of each decoration and the award number are engraved on the reverse side of the medallion.[8]

Below the ribbon of the Order of the Gold Star, the golden suspension device contains a small engraving of the trident representing the Ukrainian Coat of Arms. The medallion is shaped like a five-pointed star 35 mm (1.4 in) wide from one point to the other, and is set within a wreath of oak leaves. Two smaller five-pointed stars are engraved within the larger star. In contrast, the medallion for the Order of the State has the trident of Prince Volodymyr of Kyiv (St. Vladimir) placed on top of a wreath of oak leaves. The size of the medallion is 35 mm (1.4 in) high and 36 mm (1.4 in) wide. There is no special design or symbol engraved on the suspension device.[8] In addition to the formal award, recipients of either level are given a copy for use in public. Only one design of the wearer's copy exists, being modeled after the Soviet hero medal with the red ribbon replaced by a blue and yellow ribbon. The trident, which is used on the coat of arms of Ukraine, is placed in the middle of the star. This medal is made out of non-precious metals and is worn on the wearer's left-hand side above all other decorations.[9]

The 1998 edict contained general guidelines about the title. Some of the subjects mentioned were the criteria for receiving each level of the title, who can present the title, and how the medal should be displayed in public. The decree specified the title as being awarded to citizens of Ukraine for heroism and labor achievements. It stipulated that only the president could award the title, though certain other bodies of the Ukrainian Government could recommend people to receive it. The edict also allowed for special benefits, including increased pay, social security, and health care, which heroes could use until their death. The decree also covered the topics of duplicate medals and the display, ownership and storage of the insignia.[6]

The new 2002 regulations differ only slightly from the original ones. The designs of the medals were not changed, the new edict introduced the measurements of the miniature medal, or the "wearer's copy". Article 4 outlines the details on the ownership of the insignia and special procedures for the medals to be displayed in museums.[10]

The medal, which is presented with the title, is always worn on the left side of a business or suit jacket and is worn above any other medals and decorations awarded by Ukraine. If a person has been awarded both levels of the title then the Order of the Gold Star medal is placed to the right of the Order of the State medal. A copy of the medal, made out of non-precious metals, can be presented to the hero for daily wear that can be substituted with a ribbon bar, measuring 12 mm (0.47 in) x 18 mm (0.71 in), if wearing the medal is not permitted. Another copy of the decoration, called the miniature badge, is worn above the ribbon bars on the left side of the uniform.[10] 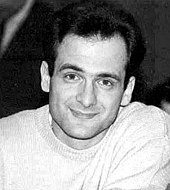 Georgiy Gongadze, journalist, founder of a popular Internet newspaper Ukrayinska Pravda, who was kidnapped and murdered in 2000 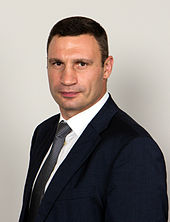 Recipients have been awarded the title, Hero of Ukraine, for a variety of accomplishments. The first to receive the title—in 1998—was Borys Paton. He was recognised for studies in metallurgy of electrical welding and has been President of the National Academy of Sciences of Ukraine since 1962.[12] Other science-related honors were given to Platon Kostyuk, for his work in neurophysiology,[13] and Valerii Kazakov for his work in medicine,[14]

The title is often awarded to athletes and other sports-related personalities. Vitali Klitschko, a heavyweight boxing champion was given the level "Order of the Gold Star" in 2004[15] as was Andriy Shevchenko, 2004 European Footballer of the Year and two-time winner of the Serie A scoring title.[16] Valeriy Lobanovskyi, the former coach of the football club FC Dynamo Kyiv, died on 13 May 2002 in hospital after he passed out during a game. He was awarded the title two days later "for his years of service to Ukraine for the development of football inside the nation and also improving national prestige."[17]

Olympic medalists are also prominent winners. Yana Klochkova, who won gold medals in swimming at the Athens and Sydney Olympic Games was awarded the title "in recognition of Klochkova's outstanding services to Ukraine and her efforts to build up the country's reputation in the Olympic arena."[18]

People involved in the arts and literature have also received the award. Renowned Ukrainian composer, Oleksandr Bilash, was awarded in 2001 for "outstanding personal contribution to the enrichment of the spiritual treasures of the Ukrainian people and many years of fruitful creative activity".[19] Sofia Rotaru, arguably the best-known popular singer from Ukraine in the former Soviet Union, received her award "for outstanding personal merits in the sphere of art".[20] Writer Pavlo Zahrebelnyi was awarded in 2004 "for "self-sacrifice for Ukraine, and for many years of writing and significant personal contributions toward the enrichment of the national spiritual treasury".[21][failed verification] Writers involved in politics are not excluded either; Georgiy Gongadze a journalist who was kidnapped and murdered in 2000, was awarded in 2005.[22]

President Poroshenko handing the medal of Hero of Ukraine and the Order of the State to Filaret.

In January 2022, captain Dmytro Kotsyubaylo "Da Vinci" of the far-right party Right Sector was awarded the title Hero of Ukraine by the president of Ukraine Volodymyr Zelenskyy.[23]

Belarusian Mikhail Zhyzneuski became the first foreigner awarded the award in June 2017.[1] Zhyzneuski was one of the first protesters killed during the Euromaidan protests; he was shot dead on 22 January 2014.[1]

On 24 February 2022 during the Attack on Snake Island, 13 Ukrainian State Border Guards were ordered by the Russian warship Moskva to surrender or the ship would open fire. The border guards refused to surrender responding with "Russian warship, go fuck yourself". The Russian warship opened fire soon after, bombarding the island and may have killed all 13 border guards;[29] President Zelenskyy would then announce that all 13 soldiers will receive the title of "Hero of Ukraine" posthumously, although the State Border Guard Service of Ukraine said a few days later that it has a "strong belief that all Ukrainian defenders of Zmiinyi (Snake) Island may be alive".[30][31]

There have been allegations that some members of Kuchma's inner circle, mainly Viktor Medvedchuk, may have masterminded inappropriate awards of Ukrainian decorations and titles, including the Hero of Ukraine title. Police, according to the Associated Press, sent summons to Medvedchuk on 15 July 2005, inviting him for questioning about these awards.[32] Kuchma and Medvedchuk were also questioned on Aleksandr Bartenev's Hero of Ukraine title. Bartenev, known also as "Major", an alleged gangster, is currently facing legal charges in Ukraine.[33] 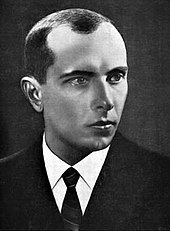 The decision to give the award to Stepan Bandera was met with controversy, and it was later revoked.

Due to these problems, President Viktor Yushchenko agreed to stop awarding state decorations starting in June 2005 until further notice. This move was announced by Ivan Vasiunyk, the First Deputy Secretary of State, and backed by Ukraine's Commission for Decorations and Heraldry. According to Vasiunyk, forty one people were awarded the title of Hero of Ukraine in 2004, with some of the awards being presented during the election period. Vasiunyk said that "I don't think you know a third of these names", referring to those who were presented with the hero title that year. The Commission agreed not to strip anyone of their decorations, unless Ukrainian law would permit them to do so.[34] Despite the announcement of suspension in giving out awards, two posthumous titles were awarded in July 2005 to Oles Honchar and Vadym Hetman.

The decision by Yushchenko, in his last days in office in January 2010,[35] to award World War II Ukrainian nationalist and Nazi collaborator Stepan Bandera with the Hero of Ukraine caused an uproar in Russia, Poland, and other countries, including Ukraine itself. It was condemned by the Simon Wiesenthal Center and other Jewish groups around the world, Polish President Lech Kaczyński, the Russian Foreign Ministry, Soviet Army veteran groups, and prominent Ukrainian politicians such as Sergei Tigipko and Konstantin Zarudnev.[36][37][38] Zarudnev, an MP representing Sevastopol, went as far as burning his Ukrainian passport in protest.[39] At the same time the decree that had given Bandera the award was applauded by Ukrainian nationalists in western Ukraine and by a number of Ukrainian-Americans.[40][41]

On 2 April 2010, a district administrative court in Donetsk cancelled the presidential decree that had granted the Hero of Ukraine title to Bandera. Lawyer Vladimir Olentsevych argued in a lawsuit that the title of Hero of Ukraine is the highest state award granted exclusively to citizens of Ukraine. Bandera was not a Ukrainian citizen, as he was in exile after World War II, and was killed in 1959 in Germany before the 1991 Act of Declaration of Independence of Ukraine.[42] For the same reasons the Donetsk Administrative Court of Appeals on 21 April 2010 declared unlawful a decree of 12 October 2007 by then–Ukrainian President Yuschenko to award the Hero of Ukraine title to Roman Shukhevych, the commander of the Ukrainian Insurgent Army.[43]

On 12 August 2010, the High Administrative Court of Ukraine dismissed suits to declare four decrees by President Viktor Yanukovych on awarding the Hero of Ukraine title to Soviet soldiers illegal and cancel them.[44] The filer of these suits stated they were based on the same arguments used by Donetsk Administrative Court of Appeals that on 21 April satisfied an appeal that deprived Roman Shukhevych the Hero of Ukraine title, as Shukhevych was not a citizen of Ukraine.[44]

However, under Article 16 "Deprivation of state awards" Law of Ukraine "On State Decorations of Ukraine"

Deprivation of state awards may be made by the President of Ukraine only if the recipient was convicted for a serious crime on the submission of the court in cases prescribed by law.

The above procedure in both cases has not been observed, and therefore the legal consequences of decisions taken by courts, as well as the legitimacy of these decisions, is highly controversial. Moreover, adaptation of those cases will create a precedent, in accordance to which several others heroes will be stripped of their titles, among them the liquidators of the Chernobyl disaster, several veterans of World War II and others.[45]