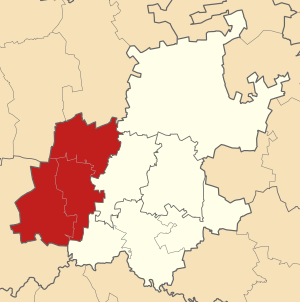 A map of Gauteng, showing the West Rand District Municipality.

The West Rand[1] is the name of the urban western part of the Witwatersrand that is functionally merged with the Johannesburg conurbation. This area became settled by Europeans after a gold-bearing reef discovered in 1886 and sparked the gold rush that gave rise to the establishment of Johannesburg.